Originally a 20 acre parcel, the Worcester Common was established to serve as a "common open space" for citizens in the late 17th Century. Although only 4.4 acres remain today, the Common continues to provide vital open space in the downtown area.

The Worcester Common has the privilege of being listed on the National Register of Historic Places. In a single 4 acre parcel, vital historical, cultural, social, recreational, civic and economic development attributes are woven together within an integrated fabric of features and spaces.

The City has invested in a series of public improvements that are intended to foster wide ranging passive and active recreational uses and help to restore the site to a central position in civic life. A public outdoor skating facility has proven to be very successful during cold weather months and the same space is used for seating, concerts and other public gatherings and events during warm weather months.

Around the Common - Walking Tour

Whether you are interested in physical fitness such as yoga, wiffle ball, dancing, watching movies outside or attending a concert series, there are so many things to do at the Worcester Common. In addition to summer events, there is also a skating oval put up during the winter. Visitors can enjoy the Oval and the Worcester Common all year round!

The Soldiers' Memorial was built in 1874 by Randolph Rogers and honors the 4,000 soldiers from the City who answered the Union call during the Civil War. Four statues representing the infantry, artillery, cavalry and navy surmount the corners on rounded pedestals. The bottom course of stonework contains four tablets engraved with 398 names of war dead, arranged alphabetically below their service unit.

The first public building to be erected on the Common was a meeting house, which according to the early customs was used not only for religious, but also civic purposes. The meeting house was built in 1719 and the first town meeting was held there in 1722.

In 1763, this structure was torn down and replaced by a larger and more modern building known as the Old South Meeting House. From its porch on July 14, 1776, the Declaration of Independence was read publically for the first time in New England by Isaiah Thomas.

As a training or muster field, the Common has been the scene of preparation and departure of many military expeditions. A company of Minute Men was organized under Captain Timothy Bigelow and, armed with muskets and cannon, drilled daily on the Common. On April 19, 1775, although they took no direct part in the battles of Lexington and Concord, they became a part of General Artemus Ward's forces at Cambridge. 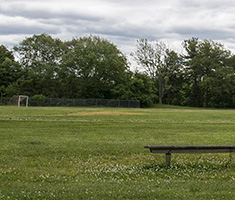 Located just north of I-290 and Brittan Square, this 26 acre park offers a baseball diamond, two ponds, sledding hills when there is snow, and a multipurpose field which mostly hosts football games in the fall and soccer games in the spring. 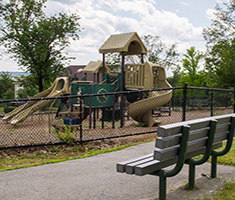 Fairmont Park is located atop Poet Laureate Hill off of Grove Street. It has a playground, half basketball court and a picnic area. This park also features amazing views of downtown Worcester. In addition, Fairmont Park has an amphitheater and occasionally hosts events. 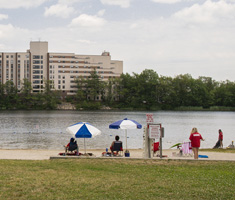