Public Notice: The Department of Inspectional Services has ordered the closing of Coes Reservoir because of the presence of cyanobacteria in densities that exceed the recreational threshold and therefore may contain toxins harmful to humans and pets. All persons should stay out of the water, discontinue boat use and fishing and keep their pets out of the water until further notice. People and pets should avoid contact with scums..

The area around Coes Reservoir (commonly referred to as Coes Pond) consists of 20.79 acres of green and blue space that offers four seasons of premier amenities including the region’s first state-of-the-art, universally accessible, multigenerational park and playground. There are approximately 5 miles of walking trails including the East-West Trail that link John J. Binienda Memorial beach, Columbus Park and the heavily used Reed Memorial Rectangular Field and playground.

Passing by Coes Pond and the former Coes Knife property along Mill Street is the Major Taylor Bike Trail. Named for Marshall Walter "Major" Taylor, an African-American with strong ties to Worcester, and winner of both the national and world bicycle spring racing championships in 1899.

Want to get involved? The Coes Zone Taskforce provides stewardship of the pond and its environs.

Formerly the site of the Coes Knife factory building, Coes Park is home to the 204-year-old Stearns Tavern and an accessible community playground and a multi-generational park. This park and playground is a place for all ages and abilities to exercise, play, enjoy nature and relax. The park provides recreational opportunities (passive and active), support facilities, ADA accessible walkways, a scenic overlook area, benches, landscape plantings, kiosks and signage. It includes 57 playground features, all of which are accessible. There also is a sledding hill, so you can have fun here all year-round!

Stearns Tavern is one of the oldest structures in the city of Worcester. The Seven Hills Foundation occupies the first floor of the repurposed tavern and operates a café and other workforce training and development programs for individuals with disabilities.

Dedicated in honor of the late State Representative John J. Binienda, Binienda Beach (formerly Coes Pond Beach) includes a bathhouse, swimming area and sandy beach, perfect for family outdoor activities. The beach is located on the western side of Coes Reservoir and serves as the headwaters of the Blackstone River. During the summer months, visitors can rent kayaks, paddle boats and paddle boards. Coes Reservoir is annually stocked with trout and is a favorite fishing spot among the locals. Non-motorized watercraft is allowed and informal launch sites are available at the John Binienda Memorial Beach and at the end of Circuit Avenue North.

Columbus Park is a green space located on the eastern side of Coes Reservoir. The excessively steep slopes throughout the majority of this park limit development opportunities. Due to this geographical feature, the park has been left fairly natural. The "Hillside" beach area is the only generally flat area and is located in the far southwest corner of the park.

The site is located with densely populated residential neighborhoods situated immediately to the south, east and north. Other notable nearby properties include Clark University, Beaver Brook Park, Lakeside Housing Development (WHA property) and Hadwen Arboretum. The Botany Bay residential community is located just to the north of the former Knights of Columbus parcel.

Knights of Columbus offers a small parking area, multi-use field which can be used for playing soccer and other informal or formal field-sports, a picnic area, playground with ADA compliant features, a basketball court and a multi-use pathway that links to the nearby open or green spaces such as Columbus Park, Coes Knife and Coes Pond Beach. 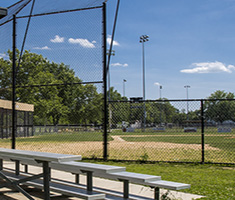 Located across the street from Foley Stadium, Beaver Brook Park is home to both Ted Williams Little League and the Worcester Vikings youth football program. It offers many paved walking paths with pedestrian lighting, as well as numerous playing fields. It’s one of the City’s busiest parks. 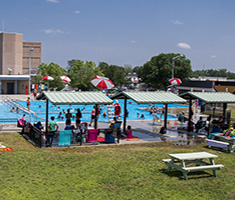 Bennett Field is a 6 acre park located behind the state Veterans Memorial Pool in Webster Square. It is also between Curtis Ponds and Coes Pond. It is undergoing renovations to the ball field and the retaining wall along Gates Lane. This park features a softball field, playground and pool! 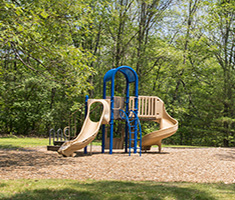