Elm Park is a historic public park in Worcester. Originally called "New Common", the original 27 acres of Elm Park were purchased in 1854, thus making Worcester one of the first cities in the United States to expend public funds to purchase land for use as a public park.

Elm Park is one of Worcester's most beloved park and open space assets. It is a historic park that was established by a progressive City looking to preserve open space for the enjoyment of its citizens. The most highly developed portion of the park is "Olmstedian" in nature and located to the south of Park Avenue. Much of the park's 58 acres are less developed (located north of Park Avenue) and typified by woodlands and trails. Numerous historic structures dot the landscape of Elm Park.

Elm Park is split in two by Park Avenue. Much of the west side of the park is wooded trails, but there is a lighted basketball court and four lighted tennis courts on the farthest western end at Newton Square. The eastern side of the park contains ponds for ice skating in the winter and two iconic bridges spanning Lincoln Pond in the middle of the park. This side also contains a playground and picnic area to enjoy.

The Elm Park Summer Concert Series has been held at Elm Park since the early 1990s. It features musical performances, mostly local musicians, while the audience can enjoy an evening outside in one of Worcester's great parks. If you enjoy sports and athletics, Elm Park offers a few choices to fit your needs. Four tennis courts and a recently updated, fenced-in basketball court can be found on the west end of the park near Newton Hill. On-street parking is available on Pleasant Street.

Additionally, the Newton Hill Disc Golf Course located in Elm Park is a full 18 hole, par 58 course available to players at no cost. Whether you're looking to get some exercise by walking the many trails and paths along the pond, hiking through Newton Hill, working out at the outdoor fitness stations or letting the little ones burn off some energy at the playground, you'll find it all at Elm Park. Don't forget to pack a picnic as you enjoy the beautiful scenery of this historic park.

History in Our City

A plaque at Elm Park reads, "This section of Elm Park containing 27 acres deeded to the City of Worcester March 17 and March 20 1854 by Levi Lincoln and John Hammond was the first purchase of land for a public park in the United States."

Shortly after its purchase in 1854, Elm Park was redesigned by the firm of Fredrick Law Olmstead, the same firm that designed Central Park in New York City. From 1874 to 1884 the basic plan for the park was put in place; pools, walks and bridges were established for passive recreation pursuits.

In 1888, Newton Hill was purchased as an addition to the park, yet has remained as a separate "rustic" unit. Then in 1910, the Olmsted Brothers landscape architecture firm was hired by the City with an emphasis on playground planning. Later, in 1970, the park was designated as a National Historic Landmark and a complete renovation was accomplished in the mid-1970s. 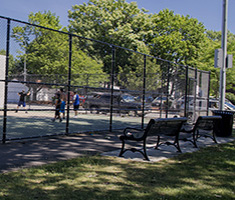 The park was purchased in 1888, and it was named Crompton Park and was then an open field which was used as a playground. Whether you and your kids are into sports, splashing around, enjoying a relaxing picnic or playing on a playground, there's something for everyone at Crompton Park! 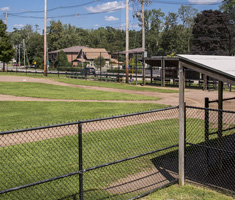 Logan Field was purchased in 1928, from the trustees of the Speedway Glens. It was named for James Logan who served as Mayor of the City for four years and was a pioneer in the playground movement. The head of the Blue Square Trail, which leads to God's Acre and Tetasset Ridge, starts here. 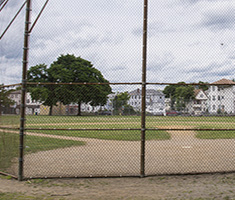 South Worcester Playground, also known as Harry Sherry Field and as Maloney Field, became a City park in 1986. This park is the home of the South Worcester Baseball league, featuring two baseball fields, a soccer area, two handball courts, a basketball court and a playground.